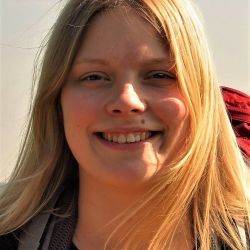 Svenja Enge is a master's student in “Geography of Environmental Risks and Human Security” at the United Nations University-EHS in cooperation with the University of Bonn. Since April 2017, she has been a student assistant for TransRe. She has a strong interest in natural hazards and especially in the interrelations between climate change adaptation and disaster risk reduction. Her academic focus lies on the assessment of risk in hazard-prone areas, particularly in the light of global dynamics such as migration and climate change.

A Guidebook for Integrating Migration and Translocality into Community-Based Adaptation

“Migration needs to be integrated into climate change adaptation work [...], we need to acknowledge the potential of migration and recognize its importance to understand the condition of places of origin and destination [...]."

To achieve a stronger theoretical and practical incorporation of migration and translocality into community adaptation dynamics, researchers, policy makers, and community development workers now have a new source of guidance and inspiration. On 28th of February 2018 the Raks Thai Foundation and the TransRe Project launched the “Migration for Adaptation Guidebook for Integrating Migration and Translocality into Community-Based Adaptation”. Promboon Panitchpakdi, Executive Director (Raks Thai), Sarinthip Promrit, Project Coordinator (Raks Thai), Patrick Sakdapolrak, Principal Investigator (TransRe), and Harald Sterly, Project Coordinator (TransRe) were joined by Sabira Coehlo, Environment and Climate Change Officer (IOM Asia Pacific) to introduce the guidebook and share thoughts on migration for adaptation based on their experiences.

How does migration impact adaptation dynamics?

Sabira Coelho showed that migration can have many positive impacts on adaptation, as it can save lives at risk, diversify income and livelihoods, encourage skills and education and contribute to innovation, economic growth and balanced labor markets. Migration also leads to increasing connectedness between people and places, which can support capacity building, as Patrick Sakdapolrak added, bringing in the translocality perspective, which is one of the core elements of the new guidebook.

However, he also warned: "We have to remember: migration is not per se a good thing [...] in the context of climate change adaptation, it can be both: an indicator of failed adaptation [...] and a sign of successful adaptation."

Using examples from IOM’s recent research project “Migration, Environment and Climate Change: Evidence for Policy (MECLEP), Coelho highlighted the case of Haiti. Here, households with migration experience were more likely to take risks and adapt to changing environments. At the same time, groups with a history of migration were better able to make use of future migration experiences, as was the case in Vietnam with farmers versus fisherman communities.

How to assess if migration leads to failed or successful adaptation?

Although IOM MECLEP found many examples of the ways in which migration can enrich adaptation outcomes, Sakdapolrak argued that the degree of freedom of choice that people have in their decision to move or stay ultimately determines the adaptive potential of migration.

Forced migrants or displaced as well as trapped populations, who want to migrate but lack the means or opportunities to do so, often end up being the most vulnerable groups to climate change induced shocks and stresses.

Another important thing to consider is that migration can have different impacts on different actors involved. Coelho emphasized that while researchers usually talk about the migrants themselves, migration also has important impacts on the migrants’ communities of destination and origin. A complete picture of the role of migration in adaptation dynamics can therefore only be achieved when all three groups are considered.

Adaptation on the back of whom?

Such a comprehensive view also ensures that all specific vulnerabilities of migrants and their social environments at home and at their destinations are taken into account.

It was mentioned "adaptation for whom?" but we could also ask "on the back of whom?" - Patrick Sakdapolrak, TransRe Project

Luise Porst from the TransRe Project mentioned gender dynamics as one issue to consider when assessing migration impacts. Her research found that migrant women often carry the heaviest load and highest expectations for taking care of the family back home. On the other hand, event participant Supaporn Krutmuang of Plan International, for instance, added that, from her research experience, "the benefit of migration is not really money, but […] knowledge and confidence of women in their communities". Given this, migration can have both negative and positive impacts, possibly leading to increased vulnerability but also to the empowerment of women, depending on the specific context.

How does the guidebook contribute to the debate?

The new guidebook seeks to address a gap in the awareness and understanding of migration potentials and risks. It provides a theoretical framework and practical tools for assessing the impact of migration and translocality on the outcomes of development work at the local level and beyond and suggests activities for shaping migration outcomes positively. Thus, it can be a valuable resource in bringing the migration for adaptation concept into (trans-)local community development work.

Promboon Panitchpakdi highlighted that the guide is not meant to be an end product but should open up a new dimension for planning. Simon Peth from the TransRe Project further emphasized the guide’s flexibility: “The Migration for Adaptation Guidebook isn't a bible. For those working on issues of gender, for example, this can be integrated into different tools, such as the migration mapping." The guide hence provides communities with new perspectives, ideas and tools, which can be refined and adapted to local issues and needs.

"Hopefully our colleagues will see value in this guide [...] and realize that resources go beyond the community."

Download the “Migration for Adaptation Guidebook for Integrating Migration and Translocality into Community-Based Adaptation” here.

You can access a live recording of the guidebook launch event here.